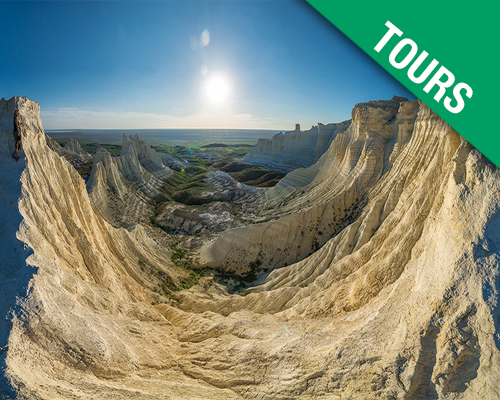 from 10 persons
Get program

Day 1
Arrival in Aktau. Transfer from the airport to hotel
Time for leisure
Overnight

Day 2
Breakfast in hotel
Departure for a two-day tour by the route: Kapamsay Canyon – the underground mosque Shakpak ata – Torysh Valley of Balls – Sherkala Mount – ethnic auyl Kogez.
The underground mosque Shakpak ata – the ancient Temple of the Sun is now one of the most beautiful mosques of Mangistau. It is the monument of the Хth century.
Hemmed-in by two walls and covered by drawings and symbols, the holy place is hidden from the vastitudes of the earth and sky, from the people’s voices. Here you will feel spiritual conciliation.
the valley of balls Torysh arouse the interest of scientists, archeologists, ufologists and, of course, tourists. To date there is no final version of the origin of these huge stone balls.
The fantastical nature of Mangistau proves that it can put up yurtas as skillfully as nomads. It is confirmed by Sherkala Mount – the natural object, which looks like a gigantic yurta from one side. The walking tour around the mountain is waiting for you.
Dinner in the territory of the ethnic auyl Korez, Night in the auyl.
Accommodation in the Kazakh yurtas, 4-5 people in each yurta.

Day 3
Breakfast in aul
The route: ethnic auyl Korez – Cretaceous canyon Zhylshy – Shumanay Valley – Ayrakty  (Ayrakty mountain remnants, petroglyphs) – the city of Aktau.
Departure for the tour of Zhylshy Canyon where you will walk in the Cretaceous canyon.
Water and wind whimsically streaked the walls of the bed with grottos, channels and cells.
You will see the valley Shumanay – Ayrakty. Rock remnants resembling magnificent Middle Ages castles rise in the center of it. The turning path made by semi-wild horses leads to the observation platform, from which the gorgeous panorama opens. One can see petroglyphs on the faces of Ayrakty Mount called by the researches “Steppe symphonies”.
Arrival in Aktau .Overnight

Day 4
Breakfast in hotel
Check out
Transfer from hotel to the airport. 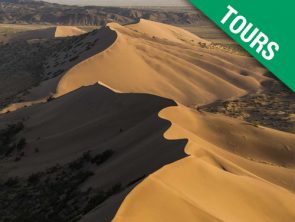 TOUR PROGRAM 1 Day Arrival in Almaty. Transfer from the airport to hotel. Check in Sight seeing. You will get to know the history of 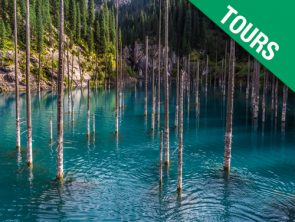 TOUR PROGRAM Day 1 Arrival in Almaty. Transfer from the airport to hotel. Check in Sight seeing You will get to know the history of