Among the tourist sites in Kazakhstan there are special places where natural beauty and the ancient history of the steppe region are closely intertwined.
Located 180 kilometers from Almaty in the natural boundary Tanbaly (or Tamgaly – the name of this place sounds internationally interpreted), the historical and archaeological complex has been a UNESCO World Heritage Site since 2004.
But Tanbaly is not just an open-air museum. Here are the ancient places of worship, the sanctuary, burial grounds and about 5,000 rock paintings, which form a single sacred territory. In ancient times ritual ceremonies were held here, people prayed to gods and spirits for more than 2,000 years. The most interesting thing here is petroglyphs, or rock carvings. 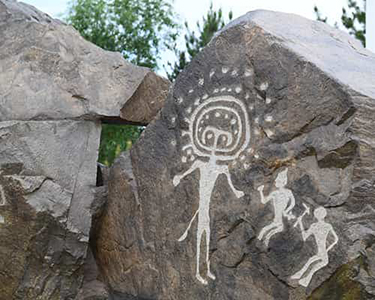 The earliest of the Tanbaly petroglyphs, according to the researchers, were made in the Bronze Age, beginning from the XIV century BC, more recent, young drawings are dated around the 6th-8th centuries of our era, the time when the Great Steppe was populated by Turkic peoples.
On the territory of the park Tanbaly petroglyphs can be found both on large areas of the rocky surface, and on separate stones and rocks. All these images are scattered across the total area of ​​the park with a size of 3 kilometers by 10 kilometers. About 5,000 petroglyphs can be found throughout the complex.
Here are the most common images of sun-gods. Many images of mummers characters, possibly shamans, warriors with clubs and spears, marriage couples, women in labor. There are also household drawings and compositions depicting people and animals, hunting scenes, rituals and sacrifices. The ancient artists used stones and, judging by the texture of the petroglyphs, some kind of metal tools as instruments.
The greatest interest are the images of sun-headed creatures – kagans, who are the most ancient and were created in the middle of the second millennium BC.
Later drawings made in the Sakian style are placed separately from the ancient petroglyphs, but in some cases complement or even overlap them. In addition to petroglyphs, archeologists in Tanbaly discovered a large number of ancient tombs: stone burial-boxes of the middle and late bronze age, barrows of earth and stones, built at different times: from the early Iron Age and almost to the present.
Tourists go to Tanbaly all year round to get acquainted with the ancient amazing culture of Kazakhstan. Do not miss and the opportunity to touch the ancient history of his native land.