Shymbulak ski resort is located in the picturesque gorge of the Trans-Ili Alatau at an altitude of 2,260 meters above sea level, a 15-minute drive from the center of Almaty.

The length of the slopes for skiing: more than 20 km

Average air temperature: in the summer +20 C, in the winter -7 C

Average snow depth: up to 1.5 meters

Number of sunny days per year: more than 300 days

Duration of the ski season: from November to April 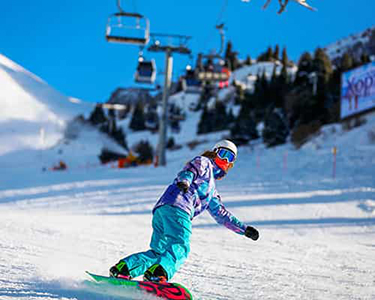 The resort was founded in 1954. From the mid-1950s, Shymbulak was a training base for Soviet mountain skiers, and USSR and Kazakhstan championships were held on its slopes.

In preparation for the 2011 Winter Asian Games, large-scale work was carried out on the reconstruction of the ski resort. The total length of the tracks from 6 km is tripled on average. In the busiest areas, the skiing area has been expanded 10-20 times. Snow cannons are installed on the slopes, which allow you to start the season earlier and prolong it. There are more than 7 places for catering, two hotels and a shop for sports and souvenir goods in the resort. Restaurants at the resort are ready to offer cuisine from all over the world. Also, a ski and snowboard school operates in the resort, which employs more than 80 highly qualified instructors and can conduct lessons in Kazakh, Russian and English.

Also, during the reconstruction of the resort, the newest cableways were built, which increased the capacity of the resort several times. It was built cableway from the base station “Medeu” to the very ski resort “Shymbulak”, which is the third in the world in length (4.5 km). The capacity of the gondola road is 2,000 people per hour. The concept of the resort was designed with the view that all the cableways worked in a single chain, allowing skiers and tourists to be at the highest point of the resort – Talgar Pass within 30 minutes.

When the ski resort is running Adventure Office – Office Adventures, which is engaged in the promotion of an active lifestyle. You will have access to such activities as paragliding, heliski, helicopter rides, training for freeriding and skiing in freeride groups, hiking, climbing and skittles with professional guides. And in the summer such extreme entertainment as: descending by bike from the mountain, paragliding, hiking and climbing the most beautiful places with professional guides, rope park and trampoline complex.

The location and remoteness of “Shymbulak” from the city allows you to effortlessly get and enjoy the beauties of Zaili Alatau and centuries-old fir trees. At the foot of the wild and unexplored mountains, there are long valleys that are covered with pine forests, amazingly beautiful meadows.

Come and enjoy the local beauty!