Home
/
News
/
National Geographic will shoot the film for the Millennium of Mangistau region
June 14, 2019 No comment(s) News
265 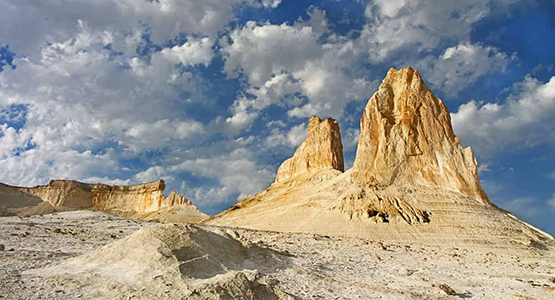 An international expedition to explore the region has proved that Mangystau has a thousand-year history.

The National Geographic TV channel will make a documentary movie in honor of the millennium of Mangystau, reports Today.kz referring to Sputnik.

As they told in the regional City Hall, the celebration of the millennium of the Mangystau region starts on June 4th on the Day of state symbols of Kazakhstan. An international scientific conference “Waves of history: The Millennium of Mangystau” is being organized in the region, as well as conducting complex archaeological excavations of the ancient sites of the Great Silk Road (Altynkazgan, Karakabak, Kyzylkala, Ketikkala).

” Documentaries will be filmed by National Geographic and the French company Pernel Media. Work continues on including Kyzylkala fortifications on the UNESCO World Heritage List,” the City Hall said.

The history of the region dates back to the Eneolithic (the transition period from the Stone to the Copper Age), and the name Mangystau (Mangyshlak) appeared in the 1000th year of our era, said regional mayor Eraly Tugzhanov.

The study of the region was conducted by an international expedition, which included scientists from Kazakhstan, Russia, Azerbaijan and Turkey. Experts from the UK and Iran also joined the team.

“The artifacts of the cult-burial complex” Altynkazgan “and the settlement of Karakabak indicate that in these localities life was seething. Two thousand years ago, such tribes as Alans and Huns lived here,” noted Tugzhanov.

He continued, that the northern branch of the Great Silk Road, passed through the Kazakh lands, and more precisely, along the south and east, covered the central territories and went to the west.

“Fortresses, caravanserais, settlements were built on the Ustyurt plateau. This site later became part of the Great Silk Road, finally formed as a trans-Eurasian trade route to the 2nd century BC. Caravanserais were built in the ancient settlements of Kyzylkala and Ketikkala. Since then to this day such Turkic-speaking tribes as the Ogyz, Khazars, Kipchak, Nogay, Turkmen, and Kazakh have periodically lived in this region,” he said.

Archaeologists have found in the region five underground mosques, more than 20 wells, as well as about 20 stone generic marks – tamga.